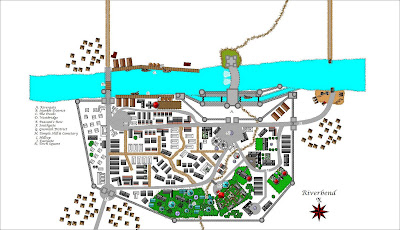 The city of Riverbend is situated on the South shore of the Aeluhar in Southern Turimor. Riverbend occupies a strategic and commercially important place in the kingdom, serving as a trade portal between Turimor and the coastal kingdoms to the West.

The cityscape is dominated by the massive Rivergate, a fortress built around a system of locks, which allows river vessels to pass between the lowlands to the West and the Highlands to the East. Two massive towers stand on either side of the Aeluhar. The north tower sits atop a 50’ cliff outside the existing city walls. The southern tower is much more massive and rises from just beyond the north wall of the city. The two towers are joined by a large stone spillway that spans the river. The southern keep rises over an artificial waterway consisting of a system of 3 locks. The locks were built with the help of Gnomic engineers who devised a massive spillway to harness the power of the Aeluhari rapids to power the locks’ system of gates and pumps.

The strategic role of Riverbend as a major control point for trade has brought growth and prosperity to the city. The population has recently begun to expand beyond the existing city walls and the local government has decided to embark on an infrastructure improvement effort in order to accommodate the ever expanding population and commerce.

Ascendant campaigns can view previous versions of their pages, see what has changed (and who did it), and even restore old versions. It's like having a rewind button for your campaign.

We've already been saving your edits, so if you upgrade now you will have instant access to your previous versions. Plus, you have our no risk refund guarantee , so there's nothing to lose.

I'm sorry, but we no longer support this web browser. Please upgrade your browser or install Chrome or Firefox to enjoy the full functionality of this site.